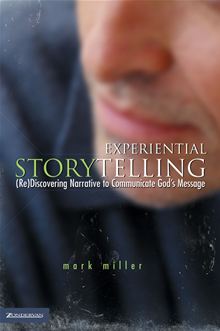 I previously posted this review on Mark Miller’s Experiential Storytelling: [Re]Discovering Narrative to Communicate God’s Message.  While the book left quite a bit to be desired, Miller can be quite quotable, and includes some great quotes from others too.

“Storytelling is powerful because it has the ability to touch human beings at a most personal level. While facts are viewed from the lens of a microscope, stories are viewed from the lens of the soul. Stories address us on every level. They speak to the mind, the body, the emotions, the spirit and the will. In a story a person can identity with situations he or she has never been in. The individual’s imagination is unlocked to dream what was previously unimaginable.” (33)  (While this may be overstating the case and creating a little bit of an unhelpful dichotomy between facts and story, nevertheless it does capture the value of story well.)

“People can argue doctrine and theology.  They can even sit with arms crossed listening to someone’s convincing reasons why they should believe.  But when powerful stories begin to be told, and when a person can identify with another person’s journey, the arms drop, the defensiveness wanes, and a receptive ear is gained.” (37)

“Stories can hold the complexities of conflict and paradox,” Annette Simmons (38)

“A sermon tells people what to think.  A story forces people to do the thinking for themselves.  It can feel dangerous because it allows for interpretation.  But one of the adjectives used to describe the Holy Spirit is “counsellor.”  Do we trust our people and the Holy Spirit enough to allow them to think for themselves?  Can we leave something open-ended, knowing that conclusions might not come until later that day, week, month, or year?  Can we allow people to own the stories?  Or do we do all of the interpretation and leave nothing to the imagination?” (41)

“Regardless of whether one considers this good or bad, for this generation, aesthetics counts more than epistemology.”  William Dyrness (55)

“The imagination is among the chief glories of being human.  When it is healthy and energetic, it ushers us into adoration and wonder, into the mysteries of God.  When it is neurotic and sluggish, it turns people, millions of them, into parasites, copycats and couch potatoes.”  Eugene Peterson (Under the Predictable Planet) (63)